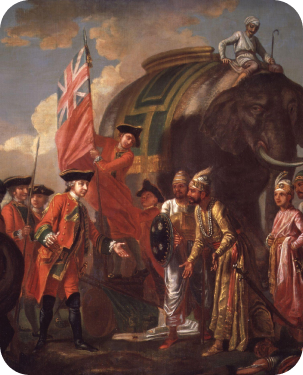 Battle of Plassey, (23 June 1757). Victory for the British East India Company in the Battle of Plassey was the start of nearly two centuries of British rule in India. For an event with such momentous consequences, it was a surprisingly unimpressive military encounter, the defeat of the Nawab of Bengal owing much to betrayal.

In India, Britain was represented by the British East India Company, a venture that had been given a royal charter in 1600 to pursue trade in the East Indies that included the right to form its own army. The French East India Company had a similar remit. From 1746, the rival companies fought the Carnatic Wars for advantage in India, where they maintained trading posts, and sought influence over local rulers. In 1755, Siraj ud-Daulah became Nawab of Bengal and adopted a pro-French policy. He overran British trading posts, including Calcutta, where British prisoners were allegedly left to die in the infamous "black hole of Calcutta." Lieutenant Colonel Robert Clive was sent from Madras to retake Calcutta and from there began plotting the overthrow of the nawab. One of the nawab’s discontented followers, Mir Jafar, was bribed secretly with a promise of the throne if he would back the British. Other Bengali generals were also suborned.

Clive advanced on the Bengali capital, Murshidabad, and was confronted by the nawab’s army at Plassey (Palashi) by the Bhaghirathi River. The balance of forces seemed to make a British victory impossible. The nawab’s army numbered 50,000, two-thirds infantry armed at best with matchlock muskets. The French had sent artillerymen to bolster the Bengali cannon to more than fifty guns. Facing this host, Clive arranged his force of 3,000, composed of European and Sepoy troops and a much smaller force of artillery.

The French artillery opened fire first, followed by the Bengali guns. The British guns returned fire. Due to the close proximity of the Bengali cavalry to the French guns, Clive’s bombardment missed the artillery but caused damage to the cavalry, forcing the nawab to pull them back for protection. When the nawab’s infantry advanced, Clive’s field guns opened fire with grapeshot along with volleys of infantry musket fire, and the Bengali troops were held back. Mir Jafar, with around one-third of the Bengali army, failed to join in the fighting, despite pleas from the nawab, and remained isolated on one flank.

The battle appeared to be heading for a stalemate when it started to rain. Clive had brought tarpaulins to keep his powder dry, but the Bengalis had no such protection. Thinking that the British guns were rendered as ineffective as his own by damp powder, the nawab ordered his cavalry to charge. However, the British guns opened fire and slaughtered many of the cavalry, killing their commander Mir Madan Khan. The nawab panicked at the loss of this valued general and ordered his forces to fall back, exposing the French artillery contingent. This was rushed by the British and captured. With the French cannon taken, the British bombarded the nawab’s positions without reply and the tide of the battle turned. The nawab fled the battlefield on a camel, and Mir Jafar was duly installed in power as a British puppet. The victory had cost the lives of only twenty-two soldiers on the British side, while achieving a major stride toward British control of Bengal. 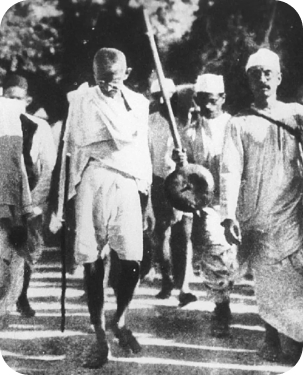 unsuccessful attempt in 1920–22, organized by Mohandas (Mahatma) Gandhi, to induce the British government of India to grant self-government, or swaraj, to India. It was one of Gandhi’s first organized acts of large-scale civil disobedience (satyagraha). The movement arose from the widespread outcry in India over the massacre at Amritsar in April 1919, when the British-led troops killed several hundred Indians. That anger was later compounded by indignation at the government’s alleged failure to take adequate action against those responsible, notably Gen. Reginald Edward Harry Dyer, who had commanded the troops involved in the massacre. Gandhi strengthened the movement by supporting (on nonviolent terms) the contemporaneous Muslim campaign against the dismemberment of the Ottoman Empire after World War I. The movement was to be nonviolent and to consist of Indians resigning their titles; boycotting government educational institutions, the courts, government service, foreign goods, and elections; and, eventually, refusing to pay taxes. Noncooperation was agreed to by the Indian National Congress at Calcutta (now Kolkata) in September 1920 and launched that December. In 1921 the government, confronted with a united Indian front for the first time, was visibly shaken, but a revolt by the Muslim Moplahs of Kerala (southwestern India) in August 1921 and a number of violent outbreaks alarmed moderate opinion. After an angry mob murdered police officers in the village of Chauri Chaura (now in Uttar Pradesh state) in February 1922, Gandhi himself called off the movement; the next month he was arrested without incident. The movement marked the transition of Indian nationalism from a middle-class to a mass basis. 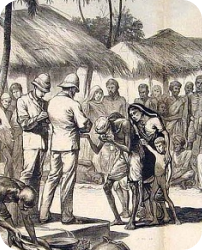 d Sepoy Mutiny or First War of Independence, widespread but unsuccessful rebellion against British rule in India in 1857–59. Begun in Meerut by Indian troops (sepoys) in the service of the British East India Company, it spread to Delhi, Agra, Kanpur, and Lucknow. In India it is often called the First War of Independence and other similar names. Background To regard the rebellion merely as a sepoy mutiny is to underestimate the root causes leading to it. British paramountcy—i.e., the belief in British dominance in Indian political, economic, and cultural life—had been introduced in India about 1820. The British increasingly used a variety of tactics to usurp control of the Hindu princely states that were under what were called subsidiary alliances with the British. Everywhere the old Indian aristocracy was being replaced by British officials. One notable British technique was called the doctrine of lapse, first perpetrated by Lord Dalhousie in the late 1840s. It involved the British prohibiting a Hindu ruler without a natural heir from adopting a successor and, after the ruler died or abdicated, annexing his land. To those problems may be added the growing discontent of the Brahmans, many of whom had been dispossessed of their revenues or had lost lucrative positions. Another serious concern was the increasing pace of Westernization, by which Hindu society was being affected by the introduction of Western ideas. Missionaries were challenging the religious beliefs of the Hindus. The humanitarian movement led to reforms that went deeper than the political superstructure. During his tenure as governor-general of India (1848–56), Lord Dalhousie made efforts toward emancipating women and had introduced a bill to remove all legal obstacles to the remarriage of Hindu widows. Converts to Christianity were to share with their Hindu relatives in the property of the family estate. There was a widespread belief that the British aimed at breaking down the caste system. The introduction of Western methods of education was a direct challenge to orthodoxy, both Hindu and Muslim. The mutiny broke out in the Bengal army because it was only in the military sphere that Indians were organized. The pretext for revolt was the introduction of the new Enfield rifle. To load it, the sepoys had to bite off the ends of lubricated cartridges. A rumour spread among the sepoys that the grease used to lubricate the cartridges was a mixture of pigs’ and cows’ lard; thus, to have oral contact with it was an insult to both Muslims and Hindus. There is no conclusive evidence that either of these materials was actually used on any of the cartridges in question. However, the perception that the cartridges were tainted added to the larger suspicion that the British were trying to undermine Indian traditional society. For their part, the British did not pay enough attention to the growing level of sepoy discontent.